Kornfeld & Andrews – One Night Only! 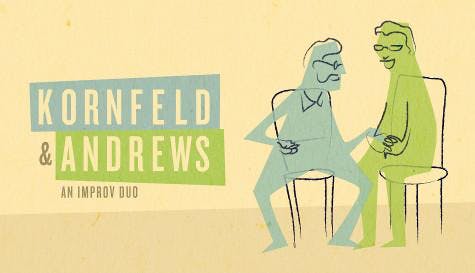 Seasoned performers, longtime instructors, and all-around swell guys Rick Andrews and Louis Kornfeld combine their improv powers for a longform show that’s as honest as it is hilarious. With a patient, nuanced style, they create a textured world filled with characters that will make you laugh and move you all at the same time. It’s comedy. It’s theater. It’s a performance you won’t soon forget.

He began improvising with Improv Boston, and continued with a stint in Saint Louis, MO.  Rick has taught workshops at improv festivals across the country, including the Boston Improv Festival, Baltimore Improv Festival, Black Box Atlanta, and many more.  He has taught improvisation to people as old as 75 and as young as 6, and has done workshops for companies like Google, Mckinsey, PepsiCo, NBCUniversal, and dozens more.

He enjoys running, putting words on pages, thinking about the brain, and he loves improv more than anything.

ABOUT LOUIS KORNFELD
Louis Kornfeld began improvising way back in 2003, when both his phone and online presence were at the forefront of millennium culture. He’s been a proud member of the Magnet Theater since it opened its doors, having logged countless hours as a performer, intern, house manager, member of ‘The Boss,’ Megawatt director, and (for the past twelve years) teacher of improvisation. What can he say? He loves it.

In addition to improv, Louis is also an award winning writer and actor whose work is routinely featured on ‘The Truth’ podcast. Check it out, why don’t you?

You can see him performing every Sunday night with the great Rick Andrews in ‘Kornfeld & Andrews.’ They have some short videos online you might enjoy.

RT @StudyHallShow: Learning and laughing combine for an hour of educational comedy you won’t see anywhere else! 2/9 @phitcomedy features @M…
RT @StudyHallShow: #StudyHallShow started in 2011 as part of the @philascifest with @phitcomedy house team Asteroid!. Asteroid! did a full…
Philly Improv Theater Presents Wide Variety Of Comedy Shows For 2020 Philly Theatre Week https://t.co/hBxEoXbqCR https://t.co/SahLYD743m
RT @StudyHallShow: For six years #StudyHallShow has invited guests from all over to have their lectures inform the audience and inspire hil…
It's a total PHIT takeover! Follow us tomorrow over at @theatrephiladelphia as we takeover their instagram to highl… https://t.co/bA7ZWOGK9I
RT @phillyncrowd: Hey! We've got a great improv #comedy show tomorrow night in #Philadelphia at @phitcomedy. The laughs start at 7 pm and…