These are just some of the incredible people who keep the comedy community moving forward in Philadelphia.

Day in and day out, the folks below help to keep thousands of audience members and hundreds of students passing through our doors happy every week of the year. 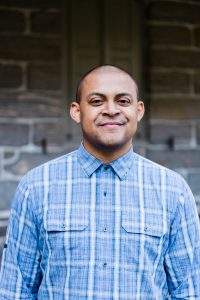 Derek Hayes
Artistic Director
Derek Hayes (he/him) is an alum of the Washington, DC comedy scene, where he interned and trained at Washington Improv Theater. Amongst multiple WIT projects during his time in DC, he is a founding member of the all-Black troupe Lena Dunham. Since moving to Philadelphia in 2017, he has been a performer, instructor, and director at PHIT, while also a producer for the We The People Improv Festival in 2018 and 2019. Since the start of the pandemic in 2020, Derek’s digital comedy projects have included co-producing four full length online sketch shows with the DC based Cookout Collective, as well as becoming a Features Contributor for The Onion. He also co-created and hosted over 30 online episodes of Hold Up!: a Black Book Club, which has been performed live at Washington Improv Theater and as a part of Contemporary Theater Company’s Ocean State Black and Funny Improv Festival. 2021 brought Derek’s most rewarding project thus far: his son, Kenny.

A member of ComedySportz Philadelphia since 1992, in addition to playing, Kelly has served as an instructor for all levels of classes at CSZ from high school through adult and the corporate applied improv team. She has also served as CSZ’s Business Manager, Co-Artistic Director, and most recently Minor League Coach.

As a teaching artist, Kelly has taught improv and acting workshops at Marywood University, The University of The Arts, C.W. Post Long Island University, and numerous award-winning arts education organizations including 1812 Productions, Philadelphia Shakespeare, InterAct, and The Walnut Street Theater.

Kelly is a passionate fan of The Tour de France and bike racing in general, all things sci-fi, especially Doctor Who and Star Trek. She has a wife, 2 dogs, 4 cats, and a not-so-secret huge crush on Red Reddington (the character from ‘The Blacklist’), and Alexander Skarsgård who she lovingly refers to as her “boyfriends.” 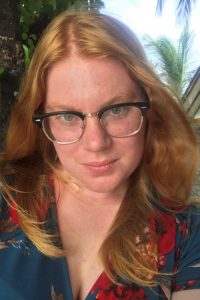 Haley Fluke
Operations Director
Haley Fluke (she/her) is an artistic producer and dramaturg originally from Astoria, Oregon (yes, the one from the Goonies). On the West Coast, she held administrative positions at the Oregon Shakespeare Festival, Washington Ensemble Theatre, Seattle’s Gay City Arts Project, and Our Shoes are Red/The Performance Lab. She most recently served as the Marketing and Box Office Manager of Quintessence Theatre in Philadelphia’s Mt. Airy neighborhood. Prior to moving to the city, Haley worked as a Project Manager for PatronManager, a Salesforce based ticketing CRM, and the Literary Manager of Company One Theatre in Boston. She is a member of LMDA and has helped with new play development projects at the Eugene O’Neill Theater Center, the Seven Devils New Play Conference, Fresh Ink Theatre, and TC Squared, among others. In her spare time, Haley runs Shakespeare on Tap, a troupe that performs interactive Shakespeare in local bars, along with her partner. They live in West Philly, have no pets by choice, and enjoy complicated cooking projects and making puppets.
GET UPDATES!
CONTACT US!

It feels so good to be back! Our opening kick-off party is tomorrow night and we'd love to see you there. Get a cha… https://t.co/bn1jp8cyZQ
Do you feel like sometimes you perform from the neck up? Never know what to do with your hands on stage? Katie Butl… https://t.co/s47AocfrdM
AUDITION ALERT! We're hosting auditions for this season's Harold Team 8/18 - 21 and we’d love to see you there! If… https://t.co/EZBrQjbl29
LAST CHANCE! Today is the final day of Early Bird Registration for Fall Classes, so if you want the best price on t… https://t.co/ViSfVN83ML
Our brand new team of teaching artists had a blast this week at Instructor Orientation. $10 Drop In Classes start M… https://t.co/vr4GPkZzql
Could your Harold use a little refresher? Join us for a special workshop Sunday, August 7 where Artistic Director D… https://t.co/adQ2xtwGni